Sierra Nevada Beer Camp Across America is the official title of the craft beer festival that took over North Embarcadero last Sunday, July 20th. The name of the event was easily shortened to Beer Camp by everyone attending, but what can’t be ignored is how amazing this festival was planned, managed, and operated. I have only experienced a staff as prepared for a festival a few times in my life and only at the extinct MVCBFF (please reincarnate this event!). The event layout, the detailed information provided to all attendees, the great (actual glass) sampler snifter, the amount of water stations, the simplicity of finding the breweries you wanted to because they were in alphabetical order, and the large areas left undisturbed by booths to hang out and enjoy the beauty that we so often take for granted in this town are just some of the examples why I thoroughly enjoyed myself. 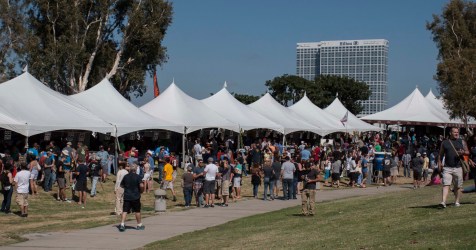 Getting to the festival was the only hurdle to jump over. Add an event to the already busy Sea Port Village area and you have the makings for an excellent traffic jam. That being said, after crossing the threshold to Beer Camp, all the road rage slipped away; replaced wonder and awe, one of the greatest craft beer events San Diego has ever seen offered a bounty of fun for all within its borders. Food truck row was filled with some of SD’s best and most popular trucks, the beer tents were giant (Giant, Used Car Tent Sale size) and offered 3 different locations for the breweries to pour from. In the back of the festival area was the stage. What may not come through from the pictures is the amount of open space Sierra Nevada wisely left for people to roam and mingle, I obviously think that part is important, I’ve already typed it twice! 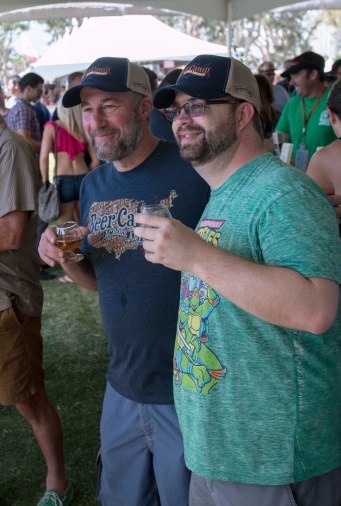 There is no way I’m going to list the 90+ breweries that were pouring craft beer to us, the drooling masses, but if you click on the Beer Camp link at the top of the post you can look for yourself at the awesomepicness. The collaboration tent was the place to be for such wonders as Ken Grossman and Vinnie Cilurzo personally pouring their beers for the crowd. I think beer just tastes better when the man that made it hands it to you. Russian River definitely had the longest line of the day, offering Pliny the Elder and Supplication definitely pleased those willing to deal with the wait. They also had all 12 of the collaboration beers from the mixed twelve pack on tap and a 13th they are only pouring at the festivals, Guildy Pleasure. I really enjoyed this super clean, west coast IPA.

Other stand out beers for me included Rush Hour from Tioga-Sequoia, Serenity from Twitsted Manzanita, Coulter IPA from Cismontane and Sour Grape from Culture. Sour Grape was one of those beers everyone at the festival was talking about, it was a surprise to most in the crowd that Culture would have/bring a sour and it was really tasty.

As I sit here typing, I’m still so stoked I got to attend this festival. Even after attending Hess Fest, a great event in its own right, the day before, I was blown away by the professionalism of the entire Sierra Nevada team. Informed staff members directed people pleasantly, checking into the media access tent was very smooth, and even the security guards were happy. Without a doubt, this event will be a bench mark against which all future festivals will be judged.

The Sierra Nevada Beer Camp Across America is just getting started. This was only the second of seven stops. Beer Camp is the greatest celebration of craft beer the USA has ever seen and I’m fortunate to have been at the party. If you have the chance, get tickets to one of the future events! Do not wait, some stops are already sold out!

For another view point, check out what my friends over at Brew Buzz had to say.