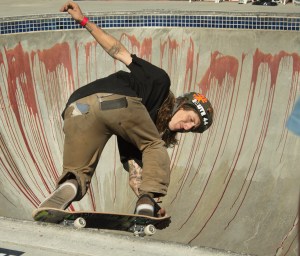 Last Sunday I attended the rescheduled Blood Bowl Pool Contest and had a great time watching the pro/am division contest. This contest was put on by Live Olley to benefit the American Red Cross. The skating portion was delayed one week due to rain but that didn’t stop people from coming out and donating their blood.

I got there just in time to see the warmups and several skaters were tearing it up. The official results came down to Cory Juneau in third, Daniel Cuervo in second and Andy MacDonald pulled out the win. Zach Dowdy was awarded a well deserved best style award skating smooth powerful lines all day. Sam Beckett won best slash and Andy also pulled out the best pop tart prize.

Outside of the official results I was really stoked on three riders – Josh Stafford, Connor Getzlaff and Rich Lopez (who made a rare appearance in a pool). Josh was throwing down some incredibly difficult switch and fakee tricks, Connor is a revert master and pulled some amazing transitions and Rich blasted high and landed a crazy invert trick.  I  had a fun day at Krause, my favorite skate/bike park, have a look at the shots and let me know what you think about them.