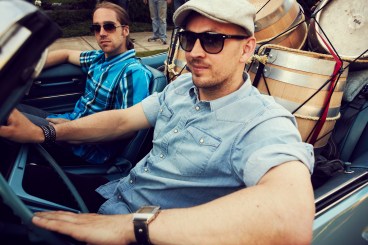 Brew Dogs, a great sounding show about craft beer, debuts on the new Esquire Network tomorrow and I can’t wait! Featuring James Watt and Martin Dickie, owners of the UK’s fastest-growing brewery, BrewDog, you get a front row seat to their crazy adventures touring the amazing craft beer world in the USA. Each week they’ll travel to a new city to sample the local craft beer and team up with a local brewery to brew their own beer.

The Esquire Network itself debuts on September 23rd, with the first airing of Brew Dogs the following day! If you’re in San Diego and have Cox it will be on channel 358 (No hi-def on Cox? You should tell them to change that!), on AT&T it will be channel 1380, channel 488 on Time Warner, 235 on DirecTV, and 115 on Dish Network.

So where does a show this epic start an adventure down the craft beer rabbit hole?  Right here in America’s craftest city™, San Diego!  Brew Dogs begin their journey at the mighty Stone Brewing Company. Hoping to brew the ultimate San Diego IPA, Martin and James use self-harvested kelp, the world’s hottest chili pepper, grown right here, and some help from their friends at Stone. “Blah, that’s not challenging enough” you’re saying inside your head? Good, because these two decide to brew where no one has brewed before! From here to LA and back, on the Surfliner, will 2 fun loving brewmasters be the first to craft an exceptional beer while on a moving train? If the mash temp drops below 150 degrees the entire train will blow up! Ok, I might have made that last part up.

Check out the video promo, get linked up with their Facebook Page and get hyped for the Brew Dogs!  With a mission to convert a million craft beer virgins over to the dark side, I’m hopeful this show will last a long, long time.