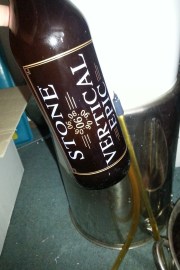 Brewing beer is not only one of the oldest traditions in history it is also a rewarding experience.  I have been a craft beer fan longer than I have been legally able to drink and have always enjoyed quality over quantity.

This is the story of my first beer, a West Coast Pale Ale with some extra hops, jalapenos and a serrano dropped in after primary fermentation for good measure.  I thought about brewing for years before I took the plunge and my only regret is waiting so long.

I already had a turkey fryer setup I got from my dad (hard to believe he’s been gone 5 years already).  I stored that for the entire time knowing someday I would brew.  When the time came to actually get to it I was excited to say the least. 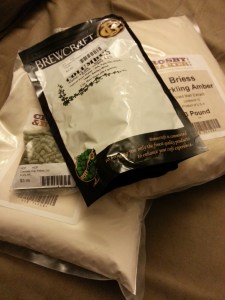 There are many ways to get into brewing beer, I chose to start with extract brewing.  I knew I wanted more volume than the Mr. Beer type setups but also knew (or thought) I didn’t have the experience for all grain (actual) brewing.  Later I’ll talk about why I’m moving on quickly from extracts.

It’s important to me to support local shops, whether that’s skateboarding, BMX, beer or anything else, I feel better giving my money to smaller shops that I feel appreciate my business more, even if it costs me a little extra.

I went into Home Brew Mart (Ballast Point Brewing) with no knowledge of what I’d find or purchase.  Once inside it was easy to see that I was going to purchase starter kit #2.  Over the years I have read a lot about home brewing and I knew I was not interested in fermenting in plastic.  If you do, great, I’m not knocking it, I haven’t even tried it.

The kit comes with the necessary equipment and the ingredients for one batch of beer.  I could have put this kit together myself and saved about $30 but as I said above, support your local scene. I chose West Coast Pale and that included one 3lb. bag of pilsner malt extract, one 3lb. bag of amber extract, two ounces of Cascade hops and some ale yeast.

After deciding on exactly what I was going to do with the ingredients I went back and got an ounce of Columbus hops and White Labs California Ale yeast.  From my reading about brewing I knew it was going to be in my best interest to use a pitch ready, high quality yeast and who better than the lab that makes most of the yeast for our city’s microbreweries. Even after having everything at my house I still took a week thinking about it and re-reading the directions.  In retrospect that was completely unnecessary but you know Captain Hindsight is a jerk so I’ll just move on.  When it was time I was stoked and got the burner setup outside.

I measured out the two gallons of water and fired up the burner and soon I had it all bubbly.  Take it off the heat and stir in my two bags of malt extract, I was blown away by how good this smells and how easy it was.  Just like making Kool Aid or anything else, just stir until dissolved.  The surprise was how amazingly sticky the residue left on your spoon is.  It makes sense, you need sugars to feed the yeast to make the alcohol.

Back on the heat, get it boiling and in go your bittering hops, in this case 1 1/2 oz. of Cascade was what the recipe called for, I also added 1/2 oz. of the Columbus hops and 2 whole, cut open jalapenos for good measure.  One word of caution, when you’re bringing your wort (the syrupy solution you made with the extract) up to a boil you need to pay attention.  It’s really easy to boil over until you make it through what they call heat break, which is where the wort stops foaming all crazy. 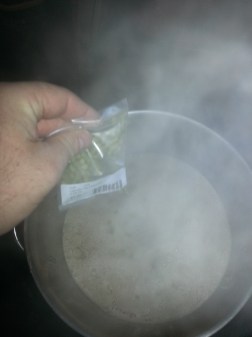 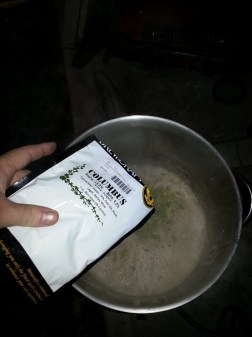 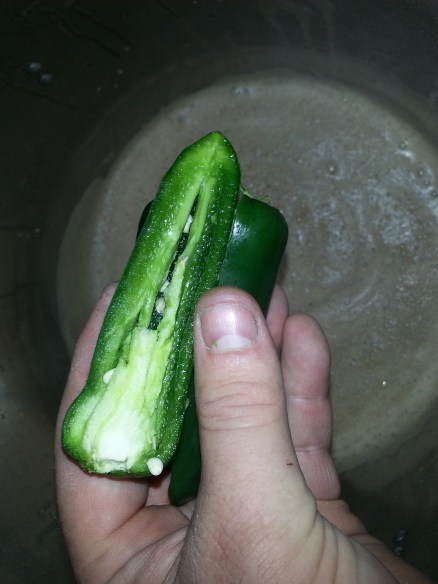 When the aroma of the hops mixed with the wort I got all happy inside.  It’s an experience you should be a part of if you love beer like I do.  I let that boil for 58 minutes, checking every 5 minutes or so. I had an issue with keeping my burner on a few times, later, I realized my propane tank was almost empty.

Once the wort’s boiling was under control I turned my attention to the sanitation of the carboy (fermenter), funnel, hydrometer and airlock.  I’m using iodophor, an iodine based sanitizer.  I follow the directions, make 5 gallons in another bucket, soak the small parts for the time recommended and then use the sanitized funnel to pour it all into the carboy.

With 2 minutes of boil left I added the aroma hops, the 1/2 oz of Cascade and Columbus that I had left and after 60 total minutes of boil I shut it down.  The next step is to get your wort cooled as much as possible before putting it into your carboy.  One of the advantages of extract brewing is you can put gallons of ice cold water into the jug first which helps cool things down faster.

I get everything into the carboy, mix it up good and it’s sitting at 76 degrees.  A little warm for pitching yeast but not that bad for my first try.  I move the carboy into the closet in my spare room and begin an extremely difficult waiting process. I just wanted to put in my yeast and have an instant beer, that is not how it works though.

Finally my brew was down to the right temperature, in goes my yeast and the real waiting begins.  The next morning I can see fermentation has started (more giggles inside) and my airlock is clicking away letting out pressure the yeast is making.  You can actually see the yeast moving around, it’s a pretty cool thing to watch. 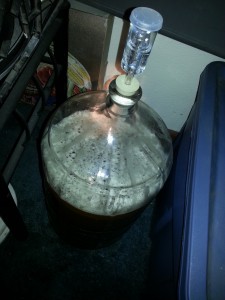 The next five days are filled with checking on the fermentation way too often. It’s not actually that exciting once you’re used to it I’m sure but your first batch it’s freaking great to watch the yeast swirling around and making the magic happen. After the fermentation settles down you still have 9 more days to wait until you can bottle.

The bottling process is actually the hard work for the homebrewer. Cleaning enough bottles for 5 gallons of beer is a major pain in the ass. That being said, I did a few things I think helped me. I found a brewing forum post that touted OxyClean as a great bottle cleaning detergent and I agree it worked really well. Secondly, I cut the circle end off the bottle cleaning brush so I could put it into my cordless drill for the actual scrubbing.  I think the combination of those techniques worked great and saved me time and hassel.

Want to make sure you’ll rinse out every bottle of beer you’ll ever drink? Wash 60 that you didn’t. I also think I will not use any labeled beer bottles again unless I have to. Shout out to Stone, Ale Smith, Mother Earth, Coronado and Rogue for using painted labels, you rule! So after an hour of soaking and forty minutes of cleaning and rinsing I still have sanitation left. I’m so thankful I bought a bottle tree, these are great inventions and worth double the cost easily. 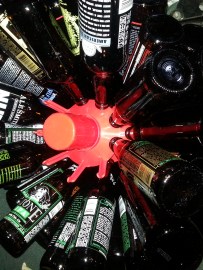 Each bottle gets dipped fully into a batch of sanitizer and thrown on the bottle tree to dry; this is far easier than cleaning and much faster. Knowing I was ready to bottle the next day made it easier to push through this arduous task. I then sanitized the bottling bucket, filling tube, racking cane and siphon tubing.

Bottling day starts off by preparing your priming sugar. Priming sugar gives your yeast an extra little dose of food so it will make carbonation in the bottle. Get that into your bottling bucket and you’re ready to siphon your beer out of the carboy. I’ve heard tales of people having problems siphoning but it was smooth and easy for me. 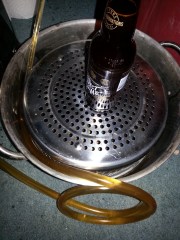 It took me a few bottles to get the hang of the filler and how to run through it but I ended up with an upside down strainer in the middle of a big pot to place the bottle on so that when a little beer came out from taking the filling tube out the bottle it wasn’t sitting in a lake of beer. The only frustrating part is the tip of the filler is extremely sensitive to being touched. If you touch it you’re squirting beer everywhere, be careful. I would turn the tubing upside down and wedge it in between the strainer and pot to hold it while capping.

I had concerns about the capper being hard to use but it was really easy and worked well beyond my expectations. It took about an hour and then I turned around and realized I had eighteen 22 ounce bottles and 15 twelve ounce bottles filled with beer I made. 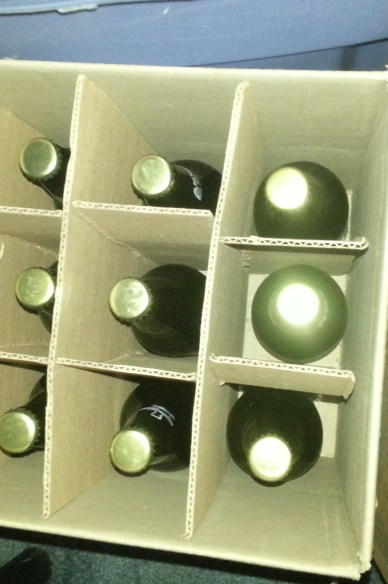 It’s been 12 days since I bottled but I tried the first one four days ago. Of course you know this if you follow me on twitter. I’m completely hooked on brewing instantly. I can’t tell you how rewarding drinking beer you made is, I’m completely stoked. 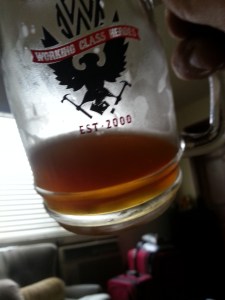 My beer at a very young taste was better than I expected. A good pepper taste with a medium, pale ale level, hoppiness. It should be much better on Sunday when I share a few bottles with friends at The Final Mission Valley Craft Beer and Food Festival. It will probably be at it’s best a week from Sunday.

How hooked am I? I’ve already brewed a second beer, a hybrid English/American brown ale. That beer brew included a grain steep or partial mash technique. Picking out the malt, steeping it prior to adding extract and reading about boil in a bag brewing has lead me to decide my next batch will be all grain.

You can make amazing beer from extracts but there are three main reasons I’m switching. The first is flavor control, after looking at the extracts available to purchase I can already see I will feel limited by what is available.  Second is cost, using actual malt and barley will save me about $25 per batch and give me better flavors and finally I want to actually brew beer from only 4 ingredients, water, barley, hops and yeast.

Some purists will argue that BIAB is not real all grain brewing but if I can make beer purely from the four ingredients it’s close enough for me.  I’m sure I will move into traditional all grain brewing soon but being able to jump in without buying more equipment is important to me at the moment.

I am a homebrewer!  Last year I wasn’t even sure I was ever going to do or say that.  The sense of accomplishment I feel is awesome.  I encourage anyone and everyone to do something they enjoy, happiness is great and important.

If you’re going to be at the Mission Valley Craft Beer Festival track me down, I’ll have tons of Sore Eye stickers on me.  Let me know if you want to try my beer or trade homebrews!

3 thoughts on “Brewing Beer – My First”