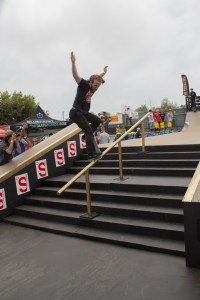 Clash at Clairemont went down last Saturday, June 1rst and I had a blast! This event benefits the YMCA Krause Family Skatepark and Grind For Life, a great charity that helps families with the high cost of fighting cancer. This event, in it’s seventh year, merged with the Sonic Generations of Vert contest.

The day starts with an amateur contest, ends with music and skating in the pool and is filled with amazing skateboarding and BMX riding. Booth village was filled with great companies supporting the effort to raise money to fight cancer. This year was the best Clash to date if you ask me.

The amateurs delivered exciting skating. Throwing big tricks down the double set, hubbas and rails, these skaters rip. San Diego is loaded with skateboarding talent, get out to some local events this summer to see for yourself. Alana Smith totally impressed me, I had just seen her win a silver medal in the Barcelona X Games park the week before and now she was entering a street contest and put down both a kickflip and a tre flip down the double set. 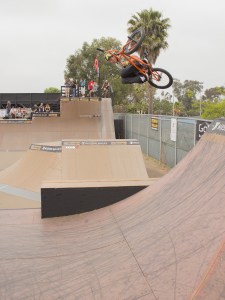 Following the contest there was a great BMX park demo. Gary Young, Kyle Hart and several other riders put on a show. Gary just won gold in X Games Barcelona park, a stylish fast rider’s rider that always has a smile on his face. He represents San Diego amazingly well.

That lead into the star of the show, the Generations of Vert contest. In this contest 3 riders from different skate “generations” are on a team and compete in runs, highest air and team runs. I really enjoyed the contest, there were two teams that even did triples on the vert. In the end, Tony Hawk, Andy Mac Donald and Mitchie Brusco put on the best triples run if you ask me.

Great bands took the stage at the pool while a great skate session went down in front of them. Three Wheels Out and Hit Dog Hollar started it off right and rocked the house. P.O.D. and Mix Master Mike closed it out with style. I haven’t seen the official totals yet but I expect we’ll find out that not only was this the most attended Clash at Clairemont ever but that we also raised the most money.

2 thoughts on “Clash at Clairemont 7 was Awesome”