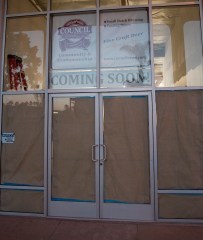 Council Brewing Co. will be opening their doors very soon in Kearny Mesa, located at 7705 Convoy Ct., with convenient access from 805 and 163. Council is owned and operated by Liz and Curtis Chism, with Greg Leiser heading up the finances. Liz will be the brew master and manager of brewery operations. This area is becoming another hot bed of breweries putting them right by Societe, Helm’s, and Magnetic.

I visited the future brewery Wednesday, March 19th, and was impressed with the space they have. Being a nano brewery with a 3 barrel, non automated brew system, they could have started with much less square footage but their long term vision includes room to grow. They even have thoughts of opening a small tasting room in a more urban area later, possibly Golden Hills or North Park.

With a tasting room area of 750+ square feet there will be plenty of room to relax, try some of their beers and talk to the owners about what they have put into every glass. Both owners are BJCP certified judges and plan on incorporating a significant amount of craft beer education into the overall Council Brewing experience. Forty bar stools, several tables, and over 75 linear feet of drink rails will accommodate you and all your friends while enjoying your time there. You will not see any shaker glasses in this brewery; so, everyone that takes their glassware as seriously as their craft beer can rejoice. 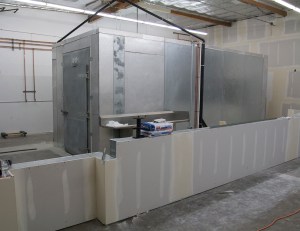 The brewery, even in it’s rough stage of construction, felt open and airy. I expect them to excel in customer satisfaction; providing a comfortable and welcoming atmosphere that I think most craft beer lovers are looking for. A plethora of breweries and tasting rooms exist in San Diego but with a good balance between brew house and tasting room area, Council is set up for success. I anticipate enjoying time spent here.

In talking to Curtis and Liz what easily comes through is their enthusiasm and passion for craft beer and brewing. Opening Council Brewing Co. is not something they’re doing as just a business venture; they truly love producing great beer and are excited to share their brews with us. 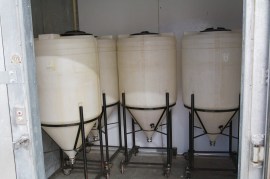 Some of the conical fermenters Council owns have iconic history. They came from Hess Brewing and a few still sport a sticker from this famous nano brewery that just recently expanded into a new 30 barrel brewhouse in North Park.

Is it odd that I’m already looking forward to their first anniversary? If a married couple owning a brewery with a female brew master wasn’t rare enough for you, they also plan on producing sours. One of their early batches will be a flanders red that will sit in a barrel until their first birthday, and I can’t wait to try it.

Expect them to launch with 4+ house beers with more to follow immediately there after. They are installing ten to twelve taps in their cold room so there will be no shortage of space to serve their creations when they are ready. 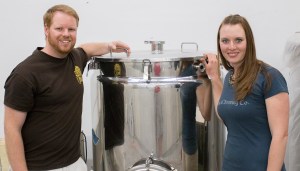 So, the big question; when will they be open? The best I can say is pay attention for more updates but mentally file their soft opening in the beginning of May if things go well with the brewery construction. As a construction manager, I can tell you that timelines for building can change very easily. Hopefully everything will go smoothly and we’ll be enjoying some Council Brewing Co. beer very soon. More news to follow in the upcoming months from this new member of the San Diego craft beer world and cheers to Liz and Curtis on being this close to their dream!