When I received an invitation to visit Helm’s Brewing Co. before their grand opening I was instantly excited.  The location, 5640 Kearny Mesa Road, Suite C/N , is easily accessible from the 163 freeways.  Near Societe Brewing, these two may be the start of a new micro brewery hot bed in San Diego.  After tasting one of their beers at The San Diego Brewers Guild Fest I was primed and ready to visit this new brewery.

Helm’s Brewery/Tasting room is a nice medium sized warehouse with an open seven barrel brewing setup.  As a beer guy I always enjoy seeing each brewery’s equipment setup and flow.  The flow is straight ahead here, clean and simple progression through the tanks and directly into the cold room.  With 3 barrel tanks in the cold room they are kegging more than half of what they brew. 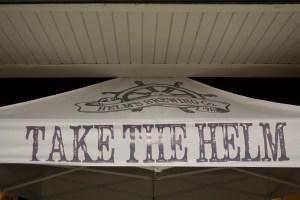 Their motto is “Take the Helm” and they really mean that.  They want to brew beer for everyone and they can only do that if we tell them what we like and want to drink.  With many style beers, a comfortable atmosphere, and an inviting, friendly staff it’s easy to see they are well on their way to achieving that goal.  Two big screens flank the taps so you won’t have to miss the game to taste these great beers.

We met half of the four partners behind Helm’s Brewing.  Matt, the General Manager, came from a home brewing background and Brian, the Brewmaster, most recently put in time at Ballast Point, another San Diego beer gem.  Showing a clear passion and enjoyment for making good beer, it was clear both of them love what they are doing.

On to the beers! 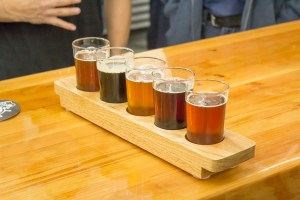 They had 6 beers on tap the night we visited.  Starting on the far left in the picture we have Captain’s Pale Ale, Samuin Harvest, Interim IPA, Brown Ale, and Hop the Ripa.  Not pictured is the great porter known as Beeruccino. I found each selection to be a quality example of its style, a good variety for a new brewery.

The Captain’s Pale Ale was rich and tasty for a pale.  Still very refreshing, I could see a lot of people enjoying this beer daily.  Samiun Harvest, dubbed Novtober Fest, was deep and smooth and was the favorite of one of my friends.

With Interim IPA you get a quality American IPA with a good hop flavor and crisp finish.  The name implies they are still finalizing the recipe but I found this version very drinkable.  One of my favorites was the Brown Ale.  Deeper and tastier malt flavor than most browns, I needed more than a taste and promptly ordered a pint.

The last two beers are a micro tale of Helm’s Brewing Co. itself.  Hop the Ripa, a really good red IPA, has been home brewed by Matt and his family for years. Deep malts and hints of caramel are balanced with good hop flavor.   Beeruccino, a serious porter, comes from Brewmaster Brian.  Infused with coffee and brewed with American Hops and black pepper, it’s finished with almond wood chips.  Both beers are truly great and show depth and character that most beers, especially major brands, can’t compare to. 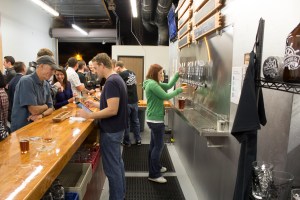 My favorite beer overall, and the consensus of our group, is Beeruccino.  High marks go to Hop the Ripa, Brown Ale, and Samiun Harvest.  The other two are quality beers that will be enjoyed tons of people.

Coming away from this tour the overall feeling is that Helm’s Brewing is a great place to enjoy really good beer.  Matt and Brian were very accommodating, answered all of my questions happily, and left us stoked on this brewery.  I highly recommend you check them out, grab a growler or two and know that I will be back there soon!