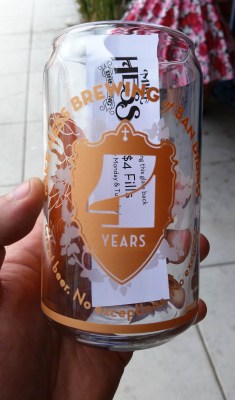 On Saturday, July 19th, the 4th anniversary party for Mike Hess Brewing, Hess Fest happened right outside the brewery. They closed down Grim St., invited a dozen breweries, 8 food vendors and 1000 of their closest friends to help them celebrate. With collaboration casks for VIPs, unlimited beer samples, 4 food dishes, and a 4th canniversary glass for everyone, this was a fun way to spend an afternoon. For a break down of the breweries and food vendors in attendance, check out the event page.

Walking into the festival area you were greeted by a T shaped space lined with the standard booths serving delicious San Diego craft beer and excellent food from local establishments. The event featured several Sore Eye Cup nominated breweries (including Hess, nominated for Grazias and Habitus), and a number of offerings from the birthday brewery itself. If you’re a craft aficionado, you definitely wanted to be inside the brewery with the VIPs. 12 one off cask collaborations of Hess beer awaited those with the vision to step up to premiere ticket level. I was really happy with wait times for beer, many booths had 2 servers and handled pouring quickly. Most lines were less than 10 people deep until more than 3 hours into the festival, which is impressive. 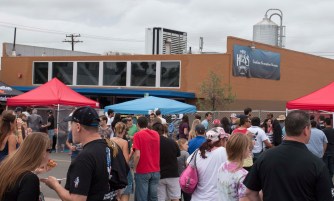 On the food side of the festival, you were allowed 4 dishes from the available vendors. I enjoyed Toronado’s dish and Slater’s 50/50 burger the most. There were some serious lines for Sicilian Thing Pizza; they were giving out a full piece of deep dish pizza and had a little trouble keeping up with demand. Crazee Burger also had a big line but they seemed to keep it moving more efficiently, this burger place always has a lot of demand when they attend any beer festival.

The first band, Routine, really put on a great show. Their music spanned a ton of genres, and most importantly, they had fun; their energy was contagious. I often see 3 people watching the band at a craft beer festival, this was not the case here. A big group of fans gathered and enjoyed the upbeat sounds of a quality, local, San Diego band.

Overall, this festival was a great success. In a city that has seen too many mediocre, cattle call beer festivals lately, it was refreshing to attend one that was ran well, had enough booths to spread out the lines and was attended by an excellent group of humans having fun.

I would like to wish Mike Hess Brewing congratulations for reaching their 4th anniversary! They have been on a very fast track, expanding from their nano brewing start in Miramar to the 30bbl  brew house in North Park. Adding to that, they have just started canning and expanding their distribution area. Keep up the good work (beer) and cheers to 4 more years!