Jack In The Box has the cure for your munchie needs, Jack’s Munchie Meals. When your hunger strikes, make it a late night foody call.

There are four new meals at Jack In The Box, available at 9pm daily, to totally annihilate your cravings, Munchie Meals. With four varieties to satisfy even the emptiest stomachs, each comes with halfsie fries (1/2 regular, 1/2 curly), two tacos, medium drink and your choice of the new mains dishes. 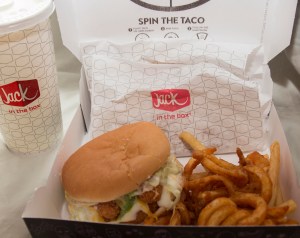 First up is the Stacked Grilled Cheese Burger, they take a grilled cheese and put it on top of a burger. The second choice is the Exploding Cheesy Chicken Sandwich, a breast, mozzarella sticks and cheese sauce. Then the Loaded Chicken Nuggets, drowning in two sauces and bacon. Closing it out is the Brunch Burger, an egg, bacon and hash browns on a burger in a croissant. 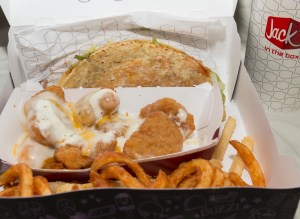 I’ve tried them all and every meal delivers a heavy blow to hunger. The box is packed with food and has a game inside; there are two games apparently but I only had “Spin The Taco” boxes. Here’s how they stack up according to me: starting with the loaded nuggets, they were smothered in goodness and topped with bacon, you can’t go wrong here. The cheesy chicken sandwich was super tasty and lead in the belly. 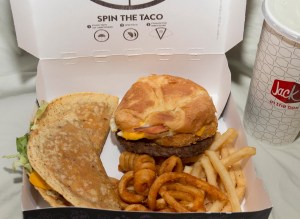 My favorites were the burgers, I’ve always enjoyed putting an egg on a burger but adding hash browns, bacon  and croissant works well. The ruler of the Munchie Meals is the Stacked Grilled Cheese Cheese Burger. Three pieces of grilled sour dough bread sandwiching a grilled cheese and a cheese burger into one delicious, genius combination of two of America’s favorite foods.

What sticks out most about Jack’s Munchie Meals is the extreme value. Each meal is only $6, I had to look at the menu twice to make sure I read it right. It’s impressive they can fill these boxes with that much good stuff for the price. The fun of the new menu items combined with the cost makes this a solid combo with only one weakness, you can’t get it for lunch.

Check out Jack’s Facebook and Twitter feeds for more updates, make sure you tag #jacksmunchiemeal in social media to part of the fun. Watch a few of their brilliant commercials for Jack’s Munchie Meals, remember the party starts at 9pm and get out and try one of these for yourself!


*Disclaimer: Jack In The Box contacted me directly, asked me to review these meals, gave me $50 in Jack Cash to check them out and $50 in Jack Cash to giveaway during my Sore Eye Sportsmas event. The photographs are of the actual food I purchased with the Jack Cash provided as a regular drive thru customer without stating the nature of this article. Thank you to JIB for their generosity.