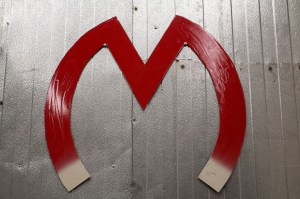 I met Morgan from Magnetic Brewing a long time ago. I was at the Mission Valley Craft Beer and Food Festival and noticed he was wearing a brewery t shirt I had never heard of. I asked him about that and found out that he was just starting his endeavor to open. Now, a few years later, he’s on the cusp of completing that goal. He has no backing, partners or employees; simply put, he is building all aspects of his operation from underground up. I had several questions and he was kind enough to answer them all, let’s take a look.

What’s your name? Address of the brewery?

When did you brew your first beer and how did you get started into more serious brewing?

Back in late 2006, I was poor and actively looking for a hobby. A hobby that would also supply me with alcohol seemed like a good idea and before thinking of beer I considered distilling. I looked into distilling a bit and read about how moonshine can make you go blind and I just decided that I didn’t want to go that way. So I made up in my mind that I would brew beer and within a couple of days I told a guy that I worked with, Victor Gomez, about my desire to brew beer. He excitedly told me about a gift certificate he had gotten for Christmas the previous year for an extract brew kit from Home Brew Mart, but didn’t have anyone to brew with. Within a couple of weeks we went down to Home Brew Mart and picked out one of their recipes, I think it was a red the first time, and brought his new equipment to his house. It was a pretty basic kit but it did have a glass carboy instead of a plastic bucket for the fermenter. We made the beer and it turned out awesome. We shared it with lots of people and they all told us that we had to make more, so we did. We both bought more equipment for our collective setup and sometimes we would brew at my place sometimes his. I think that it was after about 5 batches that we started doing all grain with coolers we bought and modified. We called ourselves Electrode Brewery and had shirts and stickers made. I incorporated an LLC to be my half of the partnership, but we were both really busy with our families and weren’t able to brew as often. Then Victor took a job in Washington. I’ve been brewing by myself since then. One day my wife, Caty, told me that I should go for it and that she supports my desire and knows that I can succeed.

What was the inspiration that led to you naming your brewery Magnetic? 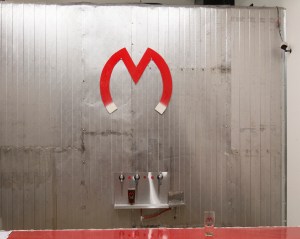 The original name, Electrode, and some of the names I was calling the individual beers had caused a conversations about similarities to Lightning Brewery in Poway several times. I decided to change the name before filing all of that paperwork with the different agencies. Magnetism and electricity are very closely related and I was planning to keep my beer names and just change the brewery name so I liked the connection for that reason. I have since changed the beer names, but I still really like that Magnetic starts with an M, just like my first and last name.

I’ve been following your progress on Facebook and it seems you are building your brewery completely by yourself from underground up, is that true?

Yes, that is completely correct so far.

Do you have any staff or partners?

I do not have staff, partners or investors. My wife has started helping me with the paperwork side which is all of the permits and licensing, but she is a volunteer. I have had some money loaned from individuals and I could definitely use more, but I have refused to sell any shares in the brewery. My overhead isn’t so high in this small space that I need other people’s hands in my pockets. Not yet anyway. 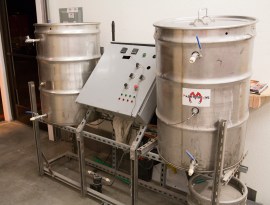 Describe your brewing system and size.

My brewing system is about 1.5 BBL consisting of two 55 gallon stainless steel drums that have been modified to be the mash-tun and brew kettle. I do use some electronic controls to monitor and control temperature.

What is your fermentation capacity?

Currently I have two plastic inverted conical fermenters which are 60 gallon each.

What beers will you be launching with?

Belgian Wit, Brown, Amber, American IPA and, and a DIPA 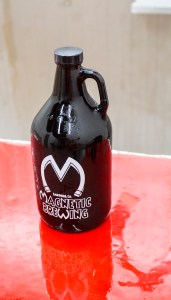 What are some of your favorite malts/ingredients to brew with?

What are your favorite hops?

What yeast strain/s do you use?

I use White Labs’ California Ale, and Belgian Wit yeasts

What have been the biggest challenges you’ve faced getting your brewery open?

Paperwork. With the ABC, the TTB, the SOS for my LLC, the BOE, property management

What has been the best surprise along this path so far?

The time that it takes to get all of the paperwork done. Brewing is the easiest part.

Out of your beers which one is your favorite?

There are many variables that change what beer I’d choose to drink at any given time. However, if you told me that I can only have one and then no more ever again; I would go with the DIPA.

Name a few of your favorite breweries in San Diego.

Have other breweries in San Diego been welcoming or standoffish?

Not at all. They’ve been very supportive and helpful. Every time I have mentioned that I’m opening my Nano Brewery I immediately get a business card and an invitation to ask them anything.

The tasting area is about 150 Sq ft, with a 10ft bar the bartender will be behind and then the two walls adjacent have a bartop running along them. The wall opposite the bar is a rollup door that will be open to the outside parking area. There is a TV on the wall behind the bar and bar stools around the three walls 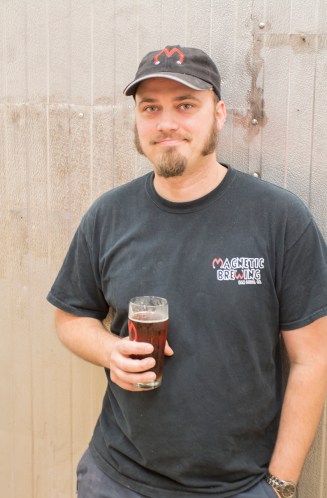 The most important question; when will you be open?

Currently, our best guess is to open in May.

What I really like about Morgan is his can do attitude. In a city filled with breweries starting with giant groups of funding partners or large public funding campaigns it’s refreshing to learn of someone doing it all on their own. He may be starting small but he can be proud he has built every aspect of his business. Is he the first picobrewery in San Diego? I’ll let others debate that; but I’m excited for the future of Magnetic Brewing and can’t wait to see opening day!