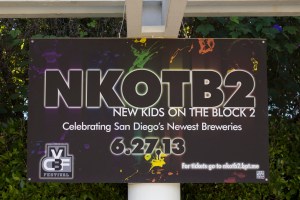 The New Kids On The Block 2 at the Handlery Hotel highlights breweries that are less than two years old and benefits a great organization, Wounded Warrior Homes. With the exploding craft beer scene in San Diego, this event featured a few breweries that aren’t even open yet. In a more intimate setting than the usual beer fest, I found NKTOB2 highly enjoyable.

With 16 of the newest San Diego craft beer breweries I was excited to try a few new beers. The official list of breweries: Stumblefoot, ChuckAlek, Saint Archer, Rip Current, Benchmark, Wet ‘N Reckless, Latitude 33, Societe, Thorn Street, Acoustic, Helms, Ironfire, Modern Times, BNS, Wien’s, and Butcher’s. The only breweries that I had not sampled anything from before were BNS, Wiens’s and ChuckAlek and they all had quality ales (and a black lager) for us to try.

The standout breweries from that list for me are Societe, Helm’s, Rip Current, Butcher’s, Acoustic and Latitude 33. In the capitol of the beeriverse it’s very difficult to say that any San Diego craft beer isn’t the absolute best but we’re seriously spoiled and have the chance to compare and contrast amazing breweries and beer daily in our home town. My favorite beer of the day was the mosaic hops version of Societe’s Bachelor, a series of IPAs using one hop so you can really taste the characteristics of each hop variety. 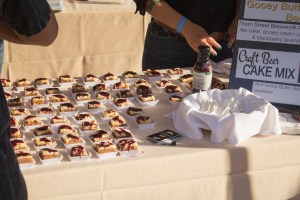 One of the standout features of this (and any Handlery) event was the food. I’m not talking about calling a food truck and having them park outside, there were actual chefs making food for everyone at the festival to enjoy. Karl Prohaska, the executive chef of the Handlery, started the day with asain ribs, bockwourst and andouille stuffed oysters. All were so good they actually ran out a little early, so they went back into the kitchen and whipped up some spicy chicken skewers, and when those were devoured they came up with an improvised ravioli dish. Kudos to the Handlery kitchen staff for being able to keep with us ravenous beer drinkers.

Nate Soroko from Toronado made some great greek pork tostadas. A nice pile of greek salad and pork on a mini toasty cracker went down wonderfully. Pub Cakes made a delicious desert to keep all the sweet tooths happy. Matt Morrison from Stone Liberty Station made my favorite dish of the day, braised pork cheek in brioche. Not only was this dish seriously tasty, but total finger food negating the beer in one hand, small plate in the other that dominate the beer festival world. 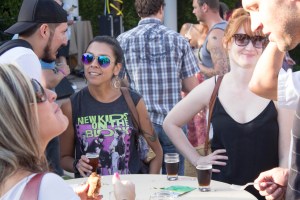 A great, fun atmosphere is what the staff of the Handlery and Chef Karl are all about and they delivered another home run with New Kids On The Block 2. I often tout the professionalism of the hotel staff at running events and this was no exception. Everyone I had the opportunity to talk with was having a blast and that’s what it’s all about!

The next Handlery event will be The Heavenly Hog Pig Out. With 8 chefs custom designing pork dishes paired with alcoholic beverages (that’s right, not just beer) this night will be seriously epic and set a new standard of excellence for pairing dinners. There is a 75 ticket limit, tickets just went on sale, I suggest you dive into what will be an amazing culinary experience.

And by the way, be sure to vote for the Sore Eye Cup, voting ends Friday, July 5th at 6pm. Some of the breweries from this event have beers in the running and I’m sure they would appreciate your support.

One thought on “New Kids On The Block 2”