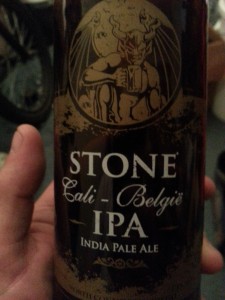 The San Diego craft beer Juggernaut known as Stone Brewing Co. released this beer a few years ago but for some reason I never tried it. I take that back, I know exactly why I didn’t try it, the Belgie* part. It’s known that I’m not a big Belgian beer fan but if you don’t know me this may be news to both of you.

Upon opening, it has a decent hop smell but my enjoyment of this beer ended there.  It’s actually more difficult for me to type these words than I predicted.  I’m a huge Stone fan and have enjoyed every beer they have released until this one.

For me, this beer has a very strange front end that I’m struggling to describe.  Somewhere between the Belgian yeast and the IPA a metallic note is born that is not good.  The beer finishes nice and dry but that only confused me enough to keep taking additional sips.

Here’s my internal dialog: “Whoa, that’s weird, not so good, oh wait, it ended ok”  Over and over for about half of the bottle before I decided to throw in the towel.  This is the first bottle of Stone I intentionally did not finish.

I have called Stone the motherland and I still stand behind my adoration of this great beer company.  They pride themselves in pushing the limits and creating new and interesting beverages.  Right now, a month after drinking this disappointment, I’m left with this thought: when you swing for the fences everyday you’re bound to strike out once.

*If you noticed the different spelling in the article title, the article and the bottle in the picture, first off, thanks for actually paying attention and secondly, Stone did that on purpose to honor different spellings of “Belgian” in Belgium itself. Some bottles were printed Belgie and some Belgique.

Sublimely Self Righteous Ale has been nominated for the Sore Eye Cup, the vote down to the finals is imminent, make sure you favorite SD craft beer is nominated.