After a year of hiatus, last Saturday, April 4th, San Diego welcomed back the best homegrown craft beer festival we have with open arms. Benefiting It’s All About the Kids Foundation, we even got to do some good while having a ton of fun. Everything that makes this event superior returned improved and ready to rock. 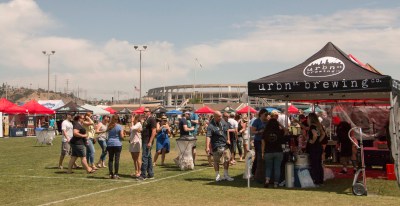 Let’s start with the venue change, moving to the old Chargers’ practice field at Qualcomm turned out great. Free parking, the trolley and most importantly grass! As a seasoned craft beer festival attendee I can assure you it’s much more comfortable than the usual blacktop setting. I would suggest more events pay attention to what these guys do but that would dilute the supremacy of MVCBFF, so I’ll have the judge strike it from the record and instruct the jury to ignore. 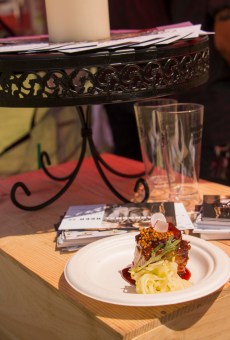 There were more tables, more booths, more food, more beer, more spirits, more cider and I could go on but I’ve said more enough. One of the biggest departures from standard beer events is including food from more than 24 places. They don’t charge you more, they just give you more (there, I said more, more) The food, as well as the beer, have no limitations. Unlimited beer and food are two of the core principles this festival was founded on and this year was no exception. In the food arena some standouts for me including Grillfellas moink ball, a Guamanian chicken salad from Toronado,  Mc Gregor’s Famous Corned Beef Slider and the dish of the festival, for me, the braised pork belly from Cork and Craft. 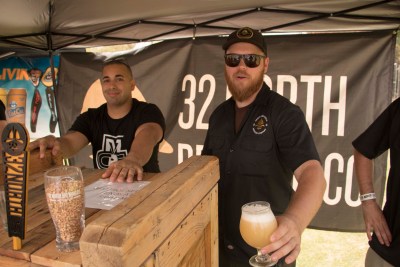 In the land of craft beer and spirits there were no disappointments. Some standouts for craft for me were Thai Chili Wahoo from Ballast Point, a super fresh batch of Fortunate Islands from Modern Times, Imperiale from Ninkasi, and my favorite of the day, Apricot Landfall from 32 North. What really impressed me about the distillers in attendance was the overall quality of the products being made here in San Diego. It really makes you think the next boom in our hometown has already started. Kudos to American Born Moonshine, Deep Eddy Vodka, Henebery Whiskey, Kill Devil Spirit Co., and Twisted Manzanita Spirits for being in on the ground floor. I can’t have a SD distillery conversation without mentioning Ballast Point (although they didn’t pour spirits at this festival), the original San Diego distillery, just won 5 medals at the American Distilling conference! 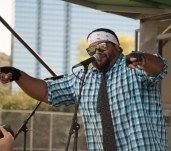 Three different music acts played to keep us entertained during all the eating and drinking. The standout for me was the Routine. I’ve seen them play a few times now and truly enjoy their sets. They’re obviously having fun on stage and that translates into a crowd having fun.

This was the party of the year. If you missed it then you better be the first person to buy VIP tickets next year! I had a blast and hope this is the beginning of the Mission Valley Craft Beer and Food legacy. I want to be talking to you about this event in another 20 years celebrating the 25th! It’s a big photo gallery, dig in and I hope you enjoyed this festival as much as I did!

Come out on Saturday for the Sore Eye Sports Fifth Anniversary Party, there will be free beer, free glasses and did I say free beer? Get RSVPed!