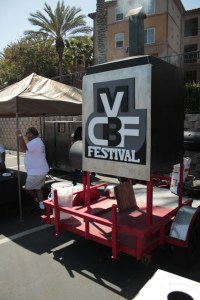 The Final Mission Valley Craft Beer and Food Festival happened about a week ago (March 24th). This event offered an amazing day of San Diego craft beer and local chef offerings all to help out an awesome charity, Wounded Warrior Homes. They provide long term housing and assistance for our wounded and traumatized soldiers, contact and support them if you are able.

This was (probably) the final go around for the greatest beer festival our city has to offer.  The Handlery Hotel is extremely good at hosting events like this and supports the San Diego craft beer industry heavily.

If you were there you know this festival is levels of magnitude better than the typical craft beer event.  With over 30 local breweries, more than 20 San Diego chefs and three bands offering unlimited beer tastes, appetizers and rocking music to fuel the good times, this event lived up to all the hype.

There was plenty of room for the festival, the booths were spread out in 4 rows throughout the parking lot.  More shade and tables were added from previous years.  The only line to speak of was at Slater’s 50/50 burger, one of the great things about the MVCBFF, you don’t just stand in line to get a beer and stand in another line. 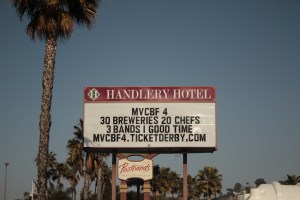 I left this year’s event with a blend of excitement for the amazing time I and everyone around me had and a nagging disappointment that it may not happen again.  The staff at the Handlery (especially Karl and Gus) are experts at smooth operating events and this one went off with out a hiccup.

A few standouts of the festival for me were Farmhouse Cafe’s flatbread tuna melt, Stone’s TJ dog and Chef Karl’s (The Handlery) Ursus Augustus mussels on the food side and Karl Straus’s Wreck Alley Cask Conditioned Ale with Jameson Soaked Oak Chips, Hess’s Ursus Augustus (a blood orange trippel) and the double IPA from Belching Beaver.

On a personal level, I could not have hoped for a better reception for my first home brewed beer.  Friends and strangers alike seemed impressed and surprised that I made a good beer on my first try.  I can only hope to live up to my own hype with my next batch that I bottled last Saturday.

Make sure you support their future craft beer events, namely Chef Karl’s Country Boil and New Kids On The Block 2.  Both of these events are an extreme value for the ticket cost and I will be there, that you can count on!

Have a look through the pictures!