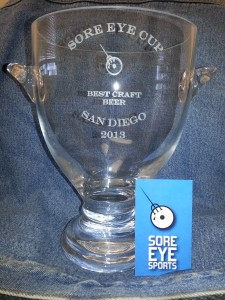 This is the actual Sore Eye Cup, not a representation

This is the official launch of a new San Diego beer award, the Sore Eye Cup! We will award our favorite local beer an actual cup they can drink out of, display or smash in the spirit of total victory. There will be three rounds for your favorite San Diego brew to survive to be the recipient of the first Cup. It starts now with open nominations from the general public.

Here’s the rules: Beers nominated must be brewed here in San Diego by a recognized brewery. (If you’re a homebrewer I’m more than willing to try your beer, anytime, maybe even trade for one of mine) They must be regular beers the brewery makes all the time; special versions, one offs and casks are not allowed. We’re looking for beers that are available to everyone in SD county.

Nominate your favorite beer(s) by emailing me at SoreEyeCup@gmail.com, @ me in twitter or tag your nomination #SoreEyeCup. Nominations are open for one month and then we will move into the voting round. The top ten beers (at least), as voted by you, the best followers on earth, will be blind tasted/judged by our panel of 10. The judges range from craft beer amateur to certified beer judges. We are truly looking for the best regularly produced craft beer San Diego has to offer. The top 3 beers in San Diego, as chosen by us, will be awarded the esteemed Sore Eye Cup and receive all the prestige and glory one blog can bestow upon a brewery!

Interested in being the title sponsor of the Cup? Email me @ brian@soreeyesports.com