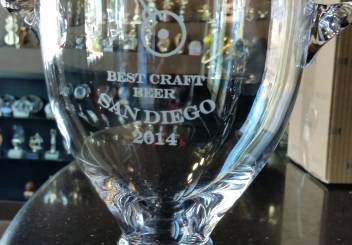 Welcome to the launch of The 3rd Annual Sore Eye Cup, an award for the best regularly produced craft beer in San Diego! Last year was a resounding success, Nelson from Alpine Beer Co. won and is the only beer not eligible for this year’s award. We will honor the winning craft beer with an actual cup (over 64oz capacity)! At the announcement party we’ll fill it up with the winning beer and the winning brewery will drink from the cup right then, as is tradition! The winners can then bask in the glory of victory and have bragging rights for an entire year!

Here are the rules: Beers nominated must be brewed here in San Diego County by a recognized brewery (If you’re a homebrewer I’m more than willing to try your beer, anytime, maybe even trade for some of mine). They must be beers the brewery makes year round; seasonal, special versions, one offs and casks are not allowed. The beers do not need to be packaged (cans or bottles), just made all year long and available for growler fills (so we can get some to judge). We’re looking for craft beers that are available to everyone in SD.

Nominate your favorite beer(s) by emailing me at SoreEyeCup@gmail.com, tweet me (@mkbain) , tag your nomination #SoreEyeCup in Twitter, comment on the post in Facebook, or comment right here on this post. Nominations are open until the end of June, and then we will move into the voting round. The top ten beers, as voted by you, the best followers on earth, will be blind tasted/judged by our panel of 10. The judges range from craft beer enthusiasts to certified beer judges. We are truly looking for the best regularly produced craft beer San Diego has to offer. The best craft beer, as chosen by us, will be awarded the esteemed Sore Eye Cup and receive all the prestige and glory one blog can bestow upon a brewery! There will be an awesome party in August to celebrate the amazing craft beer culture we have in San Diego and announce the 2015 winner of the Sore Eye Cup!

Get me your nominations and get ready for the vote down! Voting will begin Monday, July 6th and run until Sunday, August 2nd.